NO
To experience this site you must be of legal drinking age in your country of residence. By entering this site, you agree to our terms and conditions. We encourage you to enjoy the Gin Society responsibly. In accordance with the NSW Liquor Act 2007, it is against the law to sell or supply alcohol to, or to obtain alcohol on behalf of, a person under the ages of 18 years. Learn more at www.drinkwise.org.au.
Melbourne Gin Company: A winemaker’s spirit 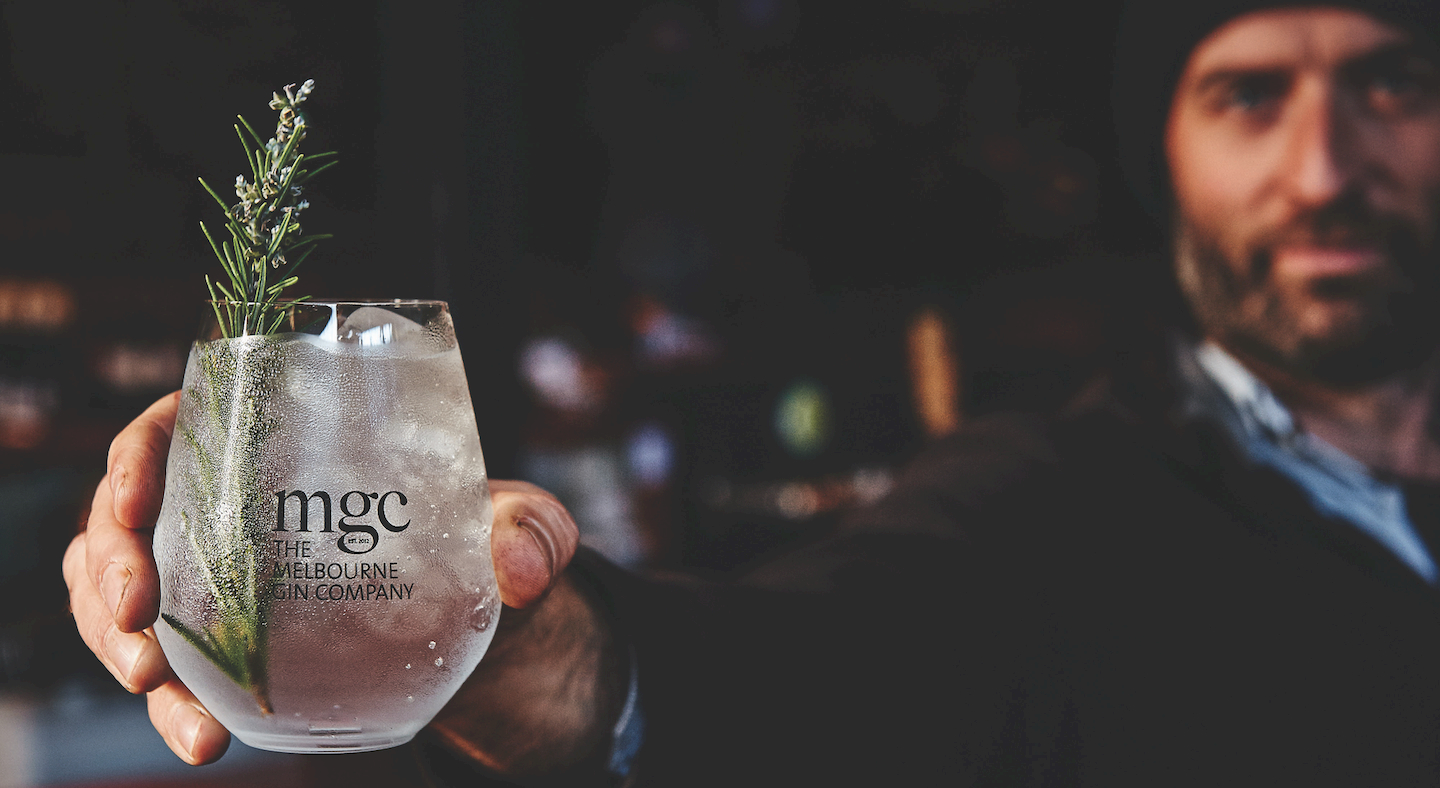 Making the winding, tree-lined drive from Melbourne’s CBD into the picturesque Yarra Valley, you’d be forgiven for thinking you’re entering wine territory rather than the home of the award-winning Melbourne Gin Company. Because that’s exactly where you are: wine country. Because the master behind the Melbourne Gin Company, Andrew Marks, is a winemaker by trade. It’s a special pocket of verdant Victoria that’s home to Andrew’s family winery, Gembrook Hill, but also the birthplace of Melbourne Gin Company’s Single Shot and Dry Gin spirits.

BORN TO BE A WINEMAKER

Almost as far back as he can remember, Andrew has found himself entrenched in the winemaking lifestyle. His parents planted their vineyard in rural Gembrook in 1983 and, despite being based in inner-city Hawthorne, Andrew would travel up to Gembrook Hill on weekends to work in the fields and earn his pocket money.

But unlike many children who grow up toiling in the family trade, Andrew always felt a strong affinity with winemaking. So much so that, aged just sixteen, he travelled halfway round the world to live on a Bordeaux vineyard for six months.

“That exchange trip reinforced the lifestyle of what it would be like being a viticulturist or a vigneron,” Andrew says.

He was hooked, and subsequent years were spent in famous winemaking locations both in Australia and abroad.

“After finishing winemaking school at Adelaide University I went through Penfolds’ two-year graduate program, then ended up staying around for another four years. There was a special white wine project on at the time, Yattarna, so I was making the White Grange.”

Not one to rest on his laurels, Andrew continued his wine-making odyssey – from Seppeltsfield in the Barossa to the United States, over to Denmark in Western Australia (just south of the Margaret River), and then across to Spain’s red wine country to complete a six-month vintage.

His own label, The Wanderer, came soon after – a collection of Pinot Noir, Shiraz and Yarra Valley Syrah that’s still in production, alongside his famous gin. But despite his thirst for knowledge and willingness to travel to far-flung places just to experience something new, Andrew’s wine and gin-making home is at Gembrook. It’s just the way it’s always been.

“Gembrook Hill is only a five-hectare vineyard, and we do everything by hand,” he says. “It’s all handmade. It’s very artisanal. And while we’re commercial in the sense that we make alcohol for sale, we’re also trying to make the best product that we can. When you drink a Gembrook Pinot, there aren’t many other wines in the Yarra Valley that taste like it.”

His mother, June, who lives on-site at Gembrook Hill, agrees: “When the winemakers around here knock off, this is what they drink. It’s the winemaker’s wine.”

A DREAM OF GIN

Many winemakers, even those who’ve experienced the heady highs of world-famous regions like Bordeaux and Burgundy first-hand, would be content with a successful family wine business and their own label. But Andrew isn’t like many others. He’s driven by the challenge. The challenge to conceive of an idea, to do it and – hopefully – to succeed.

So when a name for a gin label popped into his head while walking through Collingwood one day, an idea began to take form. “Conceived in Collingwood but made in the Yarra Valley”, as Andrew puts it, Melbourne Gin Company was born in a small flat he shared with his surgeon roommate in the winter of 2009.

“It was a pretty audacious idea, but I like the idea of a challenge,” he says. “I had some neutral spirit which we used for fortifying a wine product at Gembrook so I started doing these gin trials in my apartment in Collingwood over winter, which was quite illegal.

“I’d got hold of a little Italian still that was meant for making essential oils and I basically embarked on a series of tests. There was no book on how to make gin back in those days, so for me it was a journey into alchemy.”

That journey would see Andrew using a trial-and-error approach to distil a range of different botanicals one at a time. When he’d mastered the art of distillation, he began to blend the distilled units, leveraging the strength of his winemaker’s palate to slowly concoct the ideal gin.

“By the end of that winter I had put together a blend that was tasting like gin and wasn’t bad.”

A number of years later – most of that time spent enduring the arduous process of becoming a licensed producer of distilled alcohol – Melbourne Gin Company was founded in earnest in 2012.

FROM PORTUGAL TO GEMBROOK: AN OLFACTORY DELIGHT

Considering the widespread success of Melbourne Gin Company – the Single Shot has the unique honour of becoming the most awarded spirit no one had ever tasted, picking up Double Gold at the 2018 San Francisco World Spirits Competition, a Gin Master title at the 2018 Gin Masters Awards in the UK, and Gold at the 2018 World Gin Masters in Hong Kong before it was even released – what Andrew has achieved in just seven years is beyond astounding. Especially when you consider he’s been a winemaker for most of his life, and the Melbourne Gin Company brand was born out of Prohibition-style experiments in his apartment.

But, much like the fact that his gin is made in the Yarra Valley yet emblazoned with the ‘Melbourne’ moniker, the Melbourne Gin Company is an expression of Andrew’s global experiences. Of his time spent on French and Spanish vineyards, of his work with two of Australia’s most famous wine labels (in Penfolds and Seppeltsfield) and – perhaps most importantly to the gin itself – of the perfume stills he shipped over from Portugal.

“Our handmade, 130-litre stills were designed for making perfume,” Andrew explains. “But there’s actually a lot of crossover with gin-making.”

Meeting Lucky Phil and Shiny Buddha – Melbourne Gin Company’s relatively small copper pot stills – could be a surprising experience for anyone who’s never seen an independent distillery. They both sit right next to Louise, Andrew’s newest protégé fresh out of winemaking school at Adelaide University, as she takes care of labelling the Dry Gin and Single Shot bottles.

It’s here where the perfume story evolves into one of gin.

“In perfume-making as in gin-making, we talk about the high notes and base notes, which is how you break up the perfume flavours, or the aromas,” Andrew says. “And like I said, there was no book on how to distil.

For the award-winning Single Shot, Andrew wanted something entirely different: a gin made in a single distillation. As opposed to his more traditional Dry Gin, the Single Shot’s seven botanicals – juniper, orange peel, angelica root, cardamom, lavender, Tasmanian leatherwood honey and Australian bergamot – are distilled together, rather than separately.

The result, Andrew says, is a gin that tastes unashamedly of juniper. But the process of getting there took a major detour to South Africa – a detour that threatened to derail the Single Shot project before it was even released.

THE CASE OF THE MISSING ORANGE BERGAMOT

Looking for a “mysterious botanical that’s used in a lot of perfumes”, Andrew stumbled across orange bergamot and just knew he had to try distilling it for his next gin project.

“I had this idea for it and I wanted to use it. I scoured the world and finally found some in South Africa. We ordered it and it arrived vacuum-packed in dried form. It looked amazing so we used it all up. But when I went to reorder it, I couldn’t find it.”

Locating another supplier of bergamot – a small, oil-heavy citrus fruit that Andrew says is a cross between a bitter lemon and an orange – proved much harder than he anticipated.

“It was a massive disaster. It just tasted so amazing and it was really important to the Single Shot.”

Not to be deterred by the threat of an overwhelming obstacle, Andrew spent four months working his connections in the hope that someone, somewhere would be able to produce his secret botanical.

“Finally we discovered some growers through my cousin, who works in agriculture up in the King Valley. I got in contact with the growers who have an orchard of both yew shoot and bergamot.

“We got the fruit pure and then spent months helping the growers refine the technique for drying the bergamot and then using the different rates to get the same result [as the South African variety].”

Andrew doesn’t claim to produce a gin product on the scale of Bombay or Beefeater – nor is he interested in such things. But what he has done is build a classy brand around his small-scale distillery. The labelling, the marketing and, most importantly, the steps he’s taken to conceptualise and refine two phenomenal Australian gins, is what sets Melbourne Gin Company apart.

“Even though we look top-shelf, and in a bar in Melbourne or New York or London our bottle doesn’t look out of place, down here we’re pretty small scale,” Andrew says. “It’s not Disneyland. We’ve gone down the rabbit hole so it’s a bit more like Wonderland.

“In Melbourne we don’t even have salespeople. It’s all word-of-mouth and yet you can find our products widely. The strength of our brand – that’s almost enough said by itself, so it’s pretty exciting.”

London to Lima – The spirit of Adventure