NO
To experience this site you must be of legal drinking age in your country of residence. By entering this site, you agree to our terms and conditions. We encourage you to enjoy the Gin Society responsibly. In accordance with the NSW Liquor Act 2007, it is against the law to sell or supply alcohol to, or to obtain alcohol on behalf of, a person under the ages of 18 years. Learn more at www.drinkwise.org.au.
Bringing a taste of Island life to the mainland 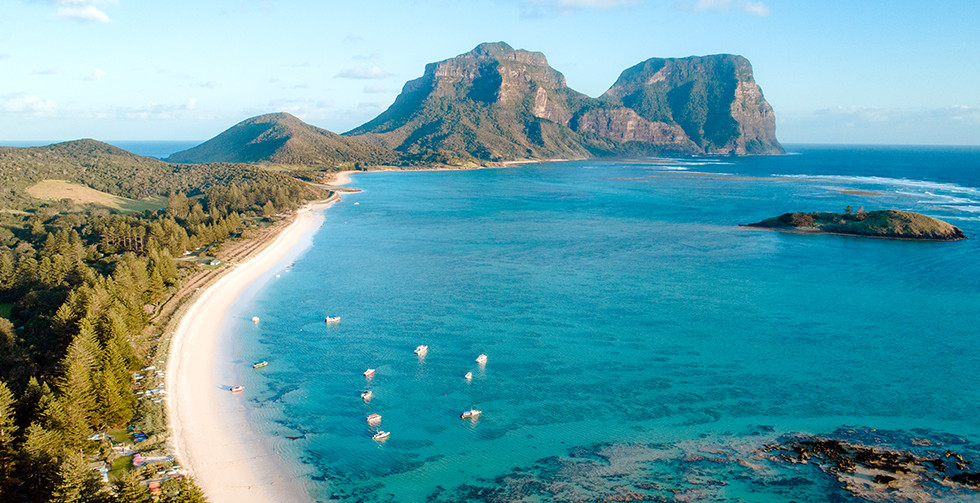 Take one part islander, one part mainlander, mix with an entrepreneurial spirit and garnish with endemic island botanicals. This is the story of how two friends are bringing a taste of Lord Howe Island to the masses.

For the first 24 years of his life, Christian Young spent a decent portion of his time on the exquisitely unique Lord Howe Island. His grandfather Claude Fay, an icon in the Sydney liquor industry, would be right there with him – watching him learn how to ride a bike, swim in the pristine waters and go fishing off the rocks or pier.
“It was an idyllic upbringing,” Christian says. But after ‘Papa’ passed away, the future co-founder of Lord Howe Island Distilling Co. wouldn’t return to where he spent some of his most memorable moments for two decades.
“It was my wife, Sharon, who was the lightning rod,” Christian says. “She told me: ‘I’m sick of hearing your family stories about Blinky Beach this and Mount Gower that. I want to go to Lord Howe!’ So we went right back to the same place we used to stay on the island and left the kids at home.”
While for Christian’s wife this trip was a dream escape that had been years in the making, for Christian it sparked a deep-seated passion – and when he spotted the gap, he knew he had the means, the ambition and the business nous to plug it.
"Twenty years had gone by but I looked around and people were still drinking Bombay Sapphire. I thought to myself: ‘We’re on arguably the most iconic island in the world. I think we can do better than this.’ So I contacted my childhood friend and sixth-generation islander Anthony Riddle. I told him there might be a market opportunity to really showcase the island, its botanical diversity and what the island has to offer. He agreed, and the rest is history.”

From brewing to distilling

A product marketer by trade, Christian realised there was a standout opportunity to bring his and Anthony’s passion for the island to the drinks space. Craft beer was the first port of call – with Lord Howe Island Brewing Co. offering a wide range of pale ales, IPAs, sours, lagers and more – but the chance to literally capture the flavours of the island was what drew the pair to distilling.
“I was looking at the market and trying to figure out the unique selling proposition for the island,” Christian says. “The fact that the island has 114 botanicals that don’t occur anywhere else on the planet is just so special.
“David Attenborough once described this place as the world’s Jurassic Park – it’s such a unique island with unique botanicals that we showcase through our spirits and beer. We’re committed to showcasing the very best of the island and ensuring we do the island’s brand justice as well.”

Both Christian and Anthony are fascinated by the rich history of Lord Howe Island.
“It’s a canvas that tells a story not just with the mountains and the ocean, but also what’s happened here over the centuries,” Christian says. “It was back in the 1830s that the first whalers were trying to put down roots.
There are so many stories from that time – from shipwrecks to rats coming ashore to lost gold.”
One story in particular planted a seed in the co-founders’ minds. So much so that they decided to hero it in one of their award-winning gins: the bottle of Wild Lemon & Hibiscus you’re enjoying right now.
“The wild lemon that we use grows in different parts of the island, and it was first planted here by the early whalers. They used Lord Howe as a stopping station to refill their stores with fresh water from the waterfalls and streams.”
“They also planted citrus all over to help ward off scurvy. Since they were sailing around the very fertile breeding grounds of the sperm whale in the South Pacific, they didn’t want to waste time going back to the mainland to refuel and recharge. With the wild lemons, they could stop in, grab some citrus and fresh water, ward off the scurvy and then go again.”
The descendants of those first lemon plantings are being picked for distillation almost two centuries later. And while the story behind the lemons might be charming, the sight of one certainly isn’t – at least from the outside.
“It’s a really unique fruit,” Christian says. “It’s ugly. It’s bumpy. It’s the type of fruit you’d find right at the bottom of the Harris Farm Markets ugly pile. But it has a beautiful scent and flavour that is unlike any other lemon we’ve found.”
The gin’s second hero botanical – hibiscus – is also taken fresh from the island.
In fact, if you visit Lord Howe Island at the right time of year you may just spot co-founder Anthony roaming around the place picking the hibiscus, which has its own DNA separate from traditional hibiscus, and wild lemons for his next distillation run.

Making a mark - but making it sustainable

Having spent decades on the island, both Christian and Anthony are aware that any change to the ecosystem must be tempered with sustainability measures. And that extends to the production of their new research and development facility. It’s intended to be a small-scale operation, with the bulk of their product still being produced on the mainland. But what the site will offer is a chance to spread their product further and contribute more to the community that has done so much for them.
“The main target for us is distillers from the mainland coming to the island with groups of people and utilising our facility,” Anthony says.
“They’ll be able to have distilling holidays on Lord Howe Island, to come out here and help spread our products throughout the wider community.
“We do have an expansion plan, but we’re also very wary of the island and its limitations. We’ve got a 400-person tourist cap for a reason, so we don’t want to take away from what existing restaurants and businesses are doing on the island. Our concept is more about spreading what’s so special about Lord Howe Island through the rest of Australia and the world, as opposed to having everyone come to us.”

Lord Howe Island Distilling Co are always looking at a variety of ways that they can contribute to the community and ecology of the island.
Examples of what they have donated to are: