NO
To experience this site you must be of legal drinking age in your country of residence. By entering this site, you agree to our terms and conditions. We encourage you to enjoy the Gin Society responsibly. In accordance with the NSW Liquor Act 2007, it is against the law to sell or supply alcohol to, or to obtain alcohol on behalf of, a person under the ages of 18 years. Learn more at www.drinkwise.org.au.
Turning the humble green ant into a gin sensation 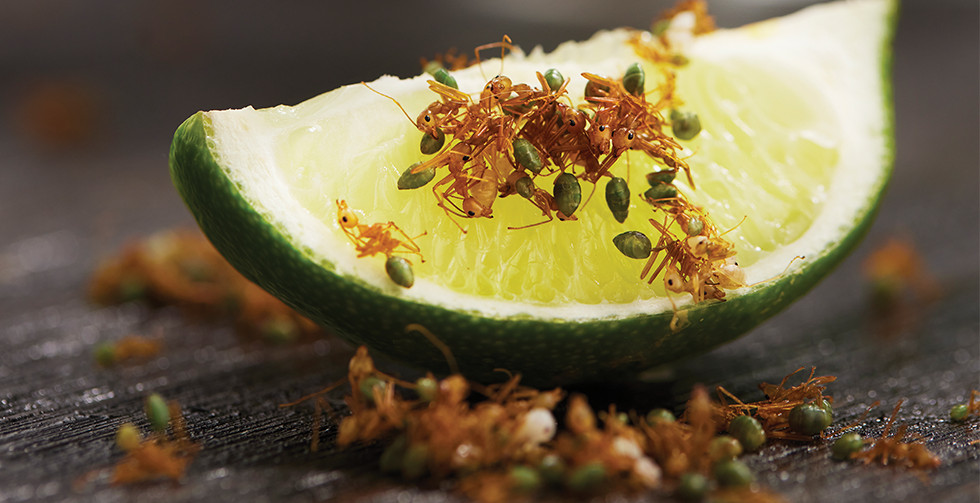 In a space as crowded as the gin market, you need to offer something truly spectacular in order to see customers return time and time again. That’s exactly what Daniel Motlop of Seven Seasons has achieved with his jaw-droppingly delicious Green Ant Gin.

Native ingredients in the schoolyard

Spend just a few moments looking beyond the gin label and you’ll find a very clear thread that flows through everything Daniel does – in work and in life. His earliest memories are of time spent in Larrakia country. His grandfather, a Torres Strait Islander from the top end of Queensland, moved to Darwin to start a family, and in doing so he unwittingly set Daniel on a path that would bring some of the most incredible native flora and fauna to a wider audience.

“I grew up with the luxury of having native ingredients in the school playground,” Daniel remembers. “There was also a lot of time spent hunting and learning about the land around the Northern Territory.”

At just 16, he upped sticks to live in Adelaide – a childhood dream that ended up lasting 10 years. But Larrakia country was never far from his mind, and soon he found himself moving back to Darwin to start a small Aboriginal harvesting business.

“That's how all this started – getting into food and things. I knew a lot about native ingredients, but I really wanted to showcase them and teach other people about them. That led to buying Something Wild [an Indigenous-owned food and beverage company] and starting Seven Seasons.”

Of people and place

There’s no false altruism to Daniel’s story. Humbleness comes naturally, and he’s more interested in sharing stories about the people side of the business rather than the economic outcome. But as a business owner, he knew that if he was going to do something big, he needed to do it right.

“For us, it was more about the commercial side of getting Aboriginal people involved in the native food chain,” he says. “I knew that if we could come up with a product that supported a community to be able to harvest a certain amount every year, and if that product went well, then obviously long term it would allow us to put money back into the community.”

Green ants have been a constant in Daniel’s story. His first commercial licence was to harvest green ants, and soon he’d spun his business nous to attract one of the biggest names in international cuisine: Rene Redzepi.

“We were lucky enough to supply Noma in Sydney for Rene’s 10-week pop-up. But we wanted to go even bigger with the green ants. For Aboriginal people harvesting the green ants, getting a popular product to go well would mean we could keep collecting them for the rest of our lives.”

Despite Daniel ramping up his supply of green ants to around 100 restaurants, he remained selective about who could get access to them.

“We wanted to keep them to the high-end restaurants who could really showcase something unique. The last thing you want to do is give your green ants to a little corner store and end up with a bad reputation.”

But even with so many high-end clients, the true scale of green ant production simply wasn’t viable as a long-term business venture. So a pivot to gin seemed like the ideal solution. Large-scale production, a fantastic product, and a much more consistent rate of harvesting.

“When you’re talking 100 grams here and there, it’s never going to be enough to create a sustainable business. So now most of our supply goes to the Green Ant Gin.”

Guided by the seasons

Despite needing a significant ramp-up in production once Seven Seasons got underway, Daniel says it’s not as simple as saying, “We need X amount of green ants for X amount of bottles.”

“Using these native ingredients means we're guided by the seasons,” he explains. “None of this stuff is farmed, so if there are no green ants around, we obviously can't harvest.”

Daniel and the wider Seven Seasons family work extremely hard to protect their way of doing things. And in doing so, he says they are working to protect their culture as well. “This company is based around the seasons, so in terms of sustainability, that’s right at the forefront.

“Aboriginal people have been doing this for a long time. We harvest during the right season, and for green ants it’s no different. We've worked out that if we harvest during the Windy Season, which is what the Green Ant Gin is based around, we know that there will only be green ants in the nests. There are no queen ants, no black flies. So harvesting outside of those times can have a big effect on the next year.”

Teaching culture and respect through spirits

It should come as no surprise that Green Ant Gin is a well-awarded spirit in its own right. With gold medals from the San Francisco World Spirits Competition, the Australian Distilled Spirits Awards and many more, it’s a gin that is just as well regarded by experts and judges as it is by the average punter looking for something unique to try. And it’s hard to go past a bottle with actual green ants floating in the spirit. So, as Daniel puts it, he’s content for things to keep flowing along as they have been in recent years.

“I love the fact that we can sit in a bar and hear people talk about green ants, talk about the seasons. Our seasons don't go by dates. We don’t say, ‘Oh, it's summer on this date. That’s when the season changes.’ It's a cycle; they go around as our seasons do in seven.

“We're really happy with the way the brand is going in terms of how our story is being talked about. For me, it’s really about the brand – it's about teaching mainstream Australia about our culture and respect. Obviously the gin has to taste good, but ultimately we really want to tell that story.”