NO
To experience this site you must be of legal drinking age in your country of residence. By entering this site, you agree to our terms and conditions. We encourage you to enjoy the Gin Society responsibly. In accordance with the NSW Liquor Act 2007, it is against the law to sell or supply alcohol to, or to obtain alcohol on behalf of, a person under the ages of 18 years. Learn more at www.drinkwise.org.au.
Women in gin 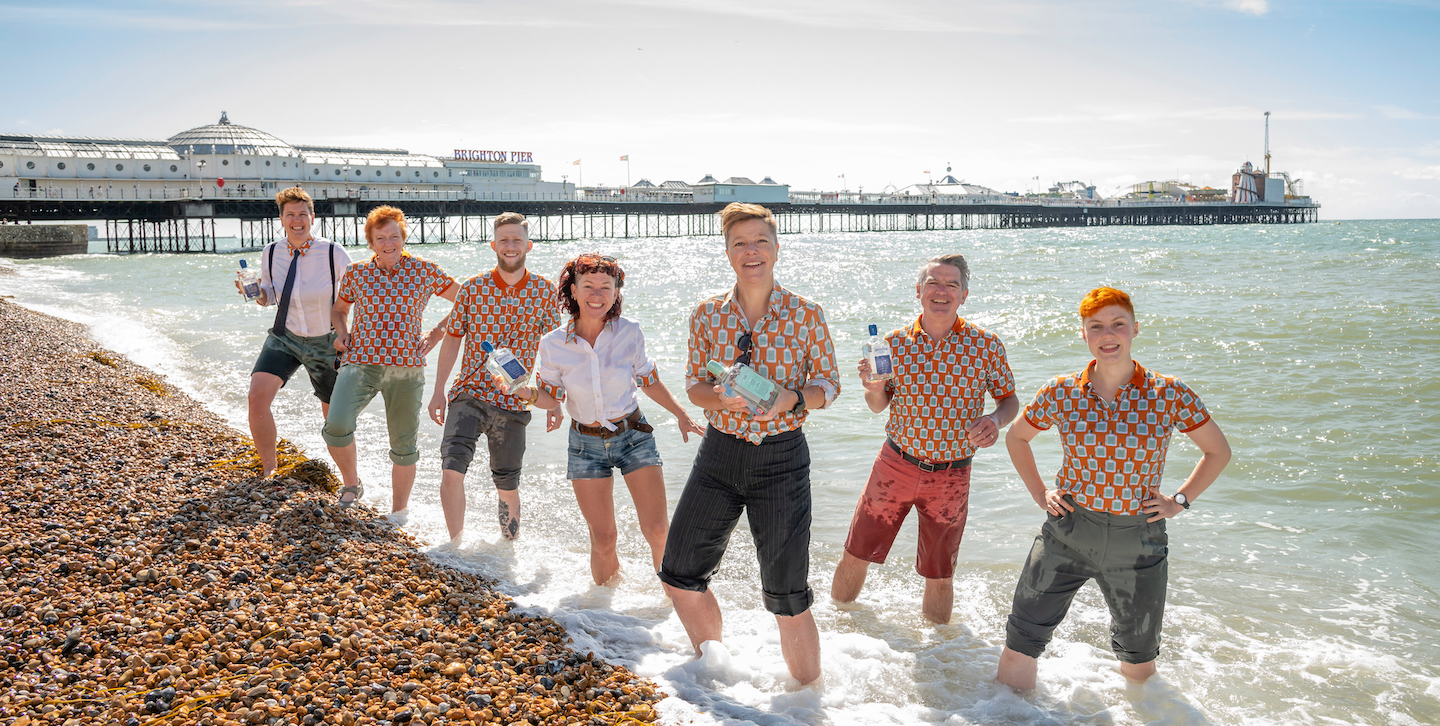 Since starting our spirited society, we've been honoured to meet talented distillers all over the world. Here, we're shining a spotlight on a few of the distilling world's leading ladies.

Having worked in cocktail bars to fund her studies both in Australia and overseas, Dervilla graduated with a PhD in microbiology and a serious passion for Negronis. A few years ago, she left her job in medical research and started making gin…

“My partner Seb got a job distilling at the Craft & Co in Collingwood, and once I saw their 180-litre copper pot still – called Carl – I instantly fell in love. We started playing around on a two-litre still and, before we knew it, we were making our own gin. My PhD has been a great asset in distilling and business because it teaches you problem-solving and extreme persistence, which are very useful skills for both.

“I'm not really sure if there are any male distillers in Australia as I only speak to the women... just kidding! This industry is traditionally male and I have heard some stories where women in gin were vigorously excluded, but the rise of craft spirits has levelled the playing field and exceptionally talented women are emerging as the industry develops. One who immediately comes to mind is Brogan Carr from Brogan’s Way in Melbourne. I’m really excited to see how she will change the country’s gin scene.

“Australia has some of the most unique flora and fauna in the world, which means Australian gin distillers are the luckiest in the world because we’re spoilt for choice with our wonderful native botanicals. In our flagship gin we use two types of gum leaves and finger limes, while our special edition Habitat has about 15 Australian natives. I love making gin because you get to discover plants you never knew existed, like the revelatory Geraldton wax that has a flavour like yellow Skittles (so much fun!) and aniseed myrtle. Gin is a spirit that anchors us in our geography – it’s a chance to literally taste the place where the gin was made.”

A one-hour distillery tour was all Laura needed to kickstart her craft-spirit career. Having studied at the Distilled Spirits Epicenter in Louisville, Kentucky – which is also known as the ‘moonshine university’ – and Dry Fly Distilling School in Spokane, Washington, she founded California’s first urban destination distillery in 2017. Her entrepreneurial spirit earned her a place on Forbes 30 Under 30 list in 2018.

“I wasn’t going to let the lack of employment opportunities nor representation of women in gin distilling sway me from my true passion. With You & Yours, I was inspired to create a distilling concept that put equal thought and effort behind not only the quality of the spirits, but the quality of the experience as a whole. That's why our tasting room is such a large part of who we are and what we do. Following on from the success of the distillery and the tasting room, we recently launched a line of canned cocktails.

“It’s so important to assemble a team of like-minded people. Having a rock-solid team makes or breaks you. At You & Yours we're all extremely independent and we know our strengths. Everyone has their own lane and really nails their own individual tasks and areas of specialisation.”

It’s not always the easiest approach, but Kathy is committed to doing things in an ethical, sustainable and community-minded way. From “dangerous experiments” with an eBay-bought still in her kitchen to recently winning a Gold Medal at the inaugural Nordic Spirits Awards for her Seaside Strength Navy Gin, it’s been an eventful few years…

“You don’t know what you don’t know until you discover you don’t know it – and I am glad I didn’t know how many difficulties and challenges there would be along the way as I probably wouldn’t have had a go! I have always loved gin. People used to laugh at me when I was younger because they just thought of it as their nan’s drink. But it’s always been good to me – even when I’ve had a bit too much. Brighton’s such a party town and, one morning while out jogging, I realised it needed its own gin!

“I think a lot of people come to craft spirits having been a passionate consumer. That was my journey. I made every mistake in the book (my first still exploded) but, nine years later and significantly greyer, I’m proud to say Brighton Gin is on the shelves.

“We are a small set-up but we value diversity – the team comprises every identity of the LGBT spectrum and we have 20-somethings working alongside our production manager who is in her late 70s. In fact, she’s my mum! She brings a terrifyingly fierce work ethic and it’s fascinating to see people of such varying ages come together to create our gin.

“We use organic pure wheat spirit and locally grown coriander seeds and milk thistle, which is indigenous to the nearby South Downs. The mash from the still is composted and our bottles contain 40% recycled glass. Plus, we are the UK’s only certified vegan gin, and that includes the wax that seals the bottle and the glue we use on the labels.”

United by their love for the remote Isle of Jura – and a penchant for gin – neighbours Alicia MacInnes, Claire Fletcher and Georgina Kitching started distilling in 2015. With all 15 botanicals used in Lussa Gin grown on or foraged from the island, on a sunny day Alicia can be found among the Scots pine trees with her dog Ginny or on a paddleboard gathering sea lettuce.

“I’m Australian – from Perth – and I first visited Jura roughly 16 years ago. I love this wild, remote, dramatic and friendly island. I love living in a place that gives me a tranquil and serene feeling, and I love living by the ocean where I feel in awe of nature and the elements.

“But while it’s a very beautiful place, job opportunities are scarce, especially for women. So really, I was driven by necessity and inspired by the chance to create a gin that embodies this amazing place. The three of us took inspiration from each other, too.

“When we started distilling, there was less than a handful of female distillers in the UK and even fewer distilleries owned by women. I would say that we are a group on the rise. It’s wrong to say that distilling is traditionally a man’s occupation. Historically, women were highly skilled in botany, fermenting and distilling for medicinal purposes and, without a doubt, for drinking too.

“Lussa Gin wouldn’t exist without support from the Isle of Jura community. This is something that’s inherited from the people who lived here before us, and it’s definitely our responsibility to nourish this. I would like to think that the whole community feels our success has as much to do with them as it has to do with us.”

Naledi was just 22 when she became South Africa’s first black female gin distiller. Her handcrafted pineapple, strawberry and raspberry-infused gins are now sold across the country.

“I’m motivated by different types of gins, the smell of the different botanicals and the curiosity of people. Apart from the juniper berries imported from Italy, we use locally sourced lavender, coriander, cardamom, wild rosemary and buchu [which has traditionally been used as a medicinal herb].

“The gin scene in South Africa has evolved. There are now more than 50 distillers located here and the list of female distillers is growing too. Like Lucy Beard, who owns Hope Distillery, Andri Janeke from New Harbour Distillery and Lorna Scott of Inverroche Gin.

“Just being part of the industry feels like an achievement, but I am also proud of how we’ve grown – we started distribution with 100 bottles per infusion and now that’s 1,200 bottles. This year, we aim to make the brand one of the most authentically African premium gins and are introducing a fynbos-infused gin.”

When it comes to seeking a source of gin-spiration, many of the women in gin we spoke with pointed to three master distillers who have been blazing a trail in the UK for years. Like Lesley Gracie, who created the recipe for Hendrick’s 1999. Tasked with concocting a drinking experience that resembled ‘eating cucumber sandwiches in British gardens’, it took 21 trial distillations to determine the perfect blend of 11 botanicals, plus the additional essence of cucumber and rose. She continues to distil small, 500-litre batches of Hendrick’s to this day.

Meanwhile, Anne Brock, with her PhD in organic chemistry from Oxford University, came up often in conversations. Having worked for four years as the lead distiller at Jensen’s Gin – our April 2019 member gin – she’s now at the helm of Bombay Sapphire.

Then there’s Joanne Moore, who’s been a distiller for almost 25 years and has overseen world-renowned brands such as BLOOM, Opihr and Thomas Dakin.

There is no Negroni without Campari