NO
To experience this site you must be of legal drinking age in your country of residence. By entering this site, you agree to our terms and conditions. We encourage you to enjoy the Gin Society responsibly. In accordance with the NSW Liquor Act 2007, it is against the law to sell or supply alcohol to, or to obtain alcohol on behalf of, a person under the ages of 18 years. Learn more at www.drinkwise.org.au.
Meet the Distiller behind Hickson Rd. 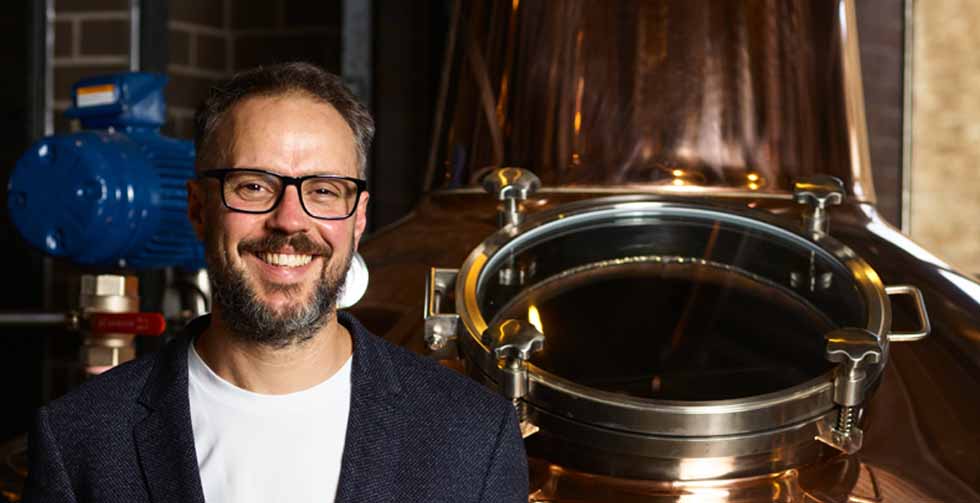 From his earliest days working at some of the biggest cocktail bars in the world to Global Brand Ambassador for Beefeater, one constant has always remained for Tim Stones: a love for all things gin. We sat down with the Head Distiller at Hickson House to discuss the origin of his Hickson Rd spirits.

Trading the bright lights of London for Sydney’s Northern Beaches

After a supposed six-month stint at Beefeater ballooned into an eight-year saga, Tim had grown tired of the late nights, the constant travel, and the frustration of perpetually living out of a suitcase. While he counts himself extremely lucky for such a unique opportunity, he was ready for a new adventure.

“So I had the bright idea to move into distilling gin, rather than just swanning around and talking about it,” Tim laughs. “I was lucky enough, working at Beefeater, to spend large amounts of time at the distillery, being around the distillers and specifically Desmond Payne, the Master Distiller. Over the course of a couple of years, I realised that this was what I wanted to do.”

After explaining the situation to his boss, Tim was quickly on his way up to Scotland to learn from some of the best whisky distillers in the world. He earned his General Certificate in Distilling and was ready to bring his newly acquired talents to the Beefeater brand. As often happens, though, his dreams were derailed by love.

“I met an Australian girl and she persuaded me to trade in the bright lights of southwest London for Australia. So we decided to pack everything up and move out here in January 2017.”

Tim, who had known Mikey Enright for years after frequent bump-ins at trade shows and cocktail competitions, found his new calling over a Sunday roast with friends.

“We’d had a few beers and sat down and got chatting. I said to Mikey, ‘Maybe we should restart our conversations about this distillery thing.’” They’d had the idea of working together while Tim was still at Beefeater in London, but the timing never seemed to work out. Now, at the start of 2020 and in the heady pre-pandemic days, it seemed like their stars were finally aligning.

It’s been a challenging – and sometimes treacherous – time for Tim, Mikey and Julian over the past couple of years. While COVID has wrought havoc across most hospitality businesses, it’s really done a number on startups and burgeoning operations trying to find their footing in the market.

Thankfully, the trio are seasoned veterans of the industry and have an eye for knowing what consumers want. So it’s no surprise that Hickson House rode out the storm and is gaining widespread attention despite the congested gin sector.

For Tim, he’s just happy to be making something that is in his blood: spectacular gin. He’s even dusted off a few botanicals he kept stored away in the back of his memory for just this occasion. Both native thyme and oolong tea are in his Hickson Rd Australian Dry Gin, and they each play a part in Tim’s story.

“A few years ago I got hold of some native thyme and I did a little test-run on it, just on its own. It was actually amazing, delicious. It was one of the real standout botanicals that I'd come across after moving to Australia. I kept it to myself for a little while, filing it away in the back of my memory bank. I knew I really, really wanted to do something with it, so when Hickson House came about I knew it was the perfect opportunity to work it into a gin. In our Australian Dry it’s a perfectly balanced botanical – it shines without being too standout or overpowering.”

Oolong tea, on the other hand, is a nod to his former mentor Desmond Payne.

“He basically taught me how to make gin, and I might be wrong but I believe he was the first person to put tea in a gin when he created Beefeater 24, which has Japanese sencha and Chinese green tea. Tea is a really interesting ingredient in gin because it contains thousands and thousands of different flavour and aroma compounds. It’s very good at binding other flavours together. So the thought of using tea worked well, and oolong has got a beautiful apricot-y, stonefruit flavour profile to it.”

A steady ship for the future

Tim knows better than most that the gin scene is becoming more and more crowded every day, which means it’s even harder for new distilleries to break into the market. But the team at Hickson House come with plaudits and industry experience that other up-and-comers would kill for. So it’s unsurprising that Tim is calm when asked about how his gins can outrank the competition.

“One of the things that sets us apart is the background of myself and Mikey. He’s basically been ‘Mr Gin’ in Australia for quite some time. He's a phenomenal partner, and he knows a lot about gin. For myself, I’ve been a Global Brand Ambassador travelling and seeing what everybody around the world is doing, and also learning from Desmond Payne at Beefeater.

“We're not trying to reinvent the wheel here. We just want to make some really good-quality gin. Our backgrounds and our influences are what shines through in the final product.

Meet the magician behind Island Gin