Gin-uary Hobart founder Courtney Quinn-McCabe is a globe-trotting gin connoisseur – who is able to list Hobart’s famous Lark Distillery on her résumé, but what’s even more impressive is that she turned a hobby into a hugely popular festival – and even has her own line of G&Ts!

Why is gin such a special spirit to you?

When I moved to Tasmania in 2012, I started working at a whisky distillery and loved the whole process of crafting spirits. When you’re having a drink, it’s not often that you actually stop and think about the craft and the passion that went into the end product. After the whisky distillery I started working at Lark. Around 2013 they were doing the Tasmanian Godfather Gin and I remember saying to a friend, “I reckon gin is going to be huge. I think it’ll be the next whisky.” They laughed at me and I promised myself I wouldn’t tell anyone else my prediction. I love gin because it’s pure alchemy. You take a neutral, base spirit and then create magic.

I’m a mad citrus fiend – kaffir lime, lemon, grapefruit, mandarin. I love anything citrusy and I appreciate a gin that showcases that element. I do venture out, but it depends how I’m feeling. Sometimes I want a big juniper punch while other times I prefer a more subtle fennel mouthfeel.

Tell us about your personal gin collection.

My poor husband! Our gin collection sits atop our piano and it keeps getting bigger and bigger. I’m so fortunate that I’ve had the opportunity to hear all the stories directly from the distillers who attend Ginuary, so they all stand out for different reasons. I’ve pretty much got a gin from each distillery that’s attended Ginuary since the start. A few from this year include Hobart No.4, Hunnington Vapour Infused, Forty Spotted Rare Tasmanian, Strait, IronHouse and plenty more.

Not content with singlehandedly putting on a massive gin event every year, Courtney recently released her first batch of premade G&Ts: Little Gin Co.“Little Gin Co was created because my very good friend Emma and I wanted a ready-to-drink gin and tonic in a bottle that was easily accessible, and one standard drink. It’s all good and well if you rock up to a party with a bottle of gin – you’re everyone’s friend. But sometimes you don’t want to do that. So we created a G&T that captures the essence of Tasmania.”

I really do love them all, but I especially love a good sundowner G&T – especially once the kids are down for bed. Recently I had the pleasure of drinking one of the most phenomenal cocktails at the Ginuary–Aloft [a fine food restaurant in Hobart] dinner collaboration. It was a twist on the French 75 but using Lawrenny Highlands Gin. It was just amazing.

Are you a fan of the tried-and-tested lime wedge or do you like changing up your garnishes?

I love a good citrus garnish but I also think with the new-world gins coming out, instead of just using a lemon or lime – which still have their place – people are using garnishes to really complement the gin. At my ticket launch party at The Story Bar in MACq 01, for example, we were serving the Forty Spotted Australian Citrus Gin with a sprig of fennel and it took the drink to a whole different level. And with the French 75 with Lawrenny Gin, it was served with a little blue cypress sprig, and it was fantastic.

Give us the rundown on Gin-uary.

As part of the tourism component for my University of Tasmania degree, I studied an elective unit of festival management. And because I was a mature-age student, I was one of those people who looked at the unit outline first, so I already knew what was in store for me. We had to create this hypothetical event, so I thought, “We’ve done lots of whisky events like Whisky Live, Whisky Expo – whisky this and that” but I realised there wasn’t anything, especially in Tasmania, that was gin focused.
So I had the main idea for an event just sitting there but I didn’t think I was going to execute it in real life. Mostly that was because I didn’t have a venue in mind. But a few months later I went to an event at The Goods Shed in Hobart and it’s got so much character with its exposed beams. I thought to myself, “Okay, in order to do this I need to call all the people I know in the industry to see if it’s something they would be willing to attend.” They gave me honest, positive feedback and so I dived right in. I madly did everything myself and had 18 distilleries in that first year, with 1,200 people in attendance. Last year was fantastic with 21 distilleries, and this year there were 25 distilleries – all Tasmanian.

How do you think the public’s perception of gin has changed?

There’s a lot more information out there now, which makes it much more accessible. I really think people have – excuse the pun – a thirst for knowledge, and this is through wanting to understand where their product comes from. It also means that with social media platforms, people are better able to engage with the distillery and each other. It’s also a different spirit today. I used to hear people say, “Oh well I just don’t like gin. There’s too much overpowering juniper.” Whereas now we’ve got so many different varieties of gin that, really, there’s a gin for everyone.

Gin-uary Gin – “The Gin-uary Gin is amazing. Unfortunately it’s all sold out but people can buy next year’s batch if they come to Gin-uary 2021!” Applewood Gin – “I love the creativity of using wattleseed and rare desert limes.” The Botanist – “It always reminds me of when my husband and I first got into gin properly.” 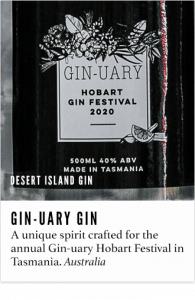 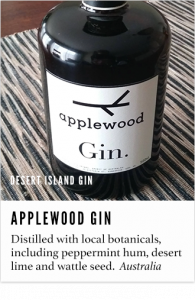 Tassie is a gin paradise, but if you could go anywhere else in the world to sample amazing gins, where would that be?

I think I’d probably go to the UK. There’s a huge variety of gins on offer there, as well as plenty of cracking festivals which are both educational and fun. I also like that different parts of the country are putting their own twists on gin.

What do you like most about the Gin Society?

Who doesn’t love getting gin in the mail? I used to struggle with buying gin because I was worried I might not like it. It’s just great that Gin Society sends out a variety of gins, many that people haven’t tried before. Also, giving that information to subscribers is fantastic because all that education, all that information makes it a special subscription. Plus it’s real value for money, easily accessible and not just for gin fanatics like me.

It blows my mind how far the Australian gin industry has come in the past five years, and it will only get bigger. With the recent accolades won by Tasmanian distilleries at the World Gin Awards, we’re shaking things up and showing the world that we’re not just a little island at the bottom of Australia – we’re a place where magic happens.