A gin that articulates local flavours, bringing together 11 different botanicals that represent the disparate cultures and ethnicities that define the Singaporean identity.

The end result is a gin that distiller Tim Whitfield describes as “punched with flavour”, with an earthy profile that’s layered, complex and changes from start to finish. “There’s a slight citrus on the nose, a herbal on the palate at the beginning, and if you let it warm in the mouth the profile changes. You get the complexity of all the different flavours coming through. But it has a long finish and a slight creaminess to it that comes from the vanilla.”

Gin is becoming serious business in Singapore. I was surprised when I came across this artisanal botanically diverse gin known as Tanglin, the award-winning first of its kind in Singapore. It’s a gin that articulates the local flavours, bringing together 11 different botanicals that represent the disparate cultures and ethnicities that define the Singaporean identity.

I believe Tanglin is the dark horse in a race with the rest of the gins available in the Singapore market. Its diverse flavours are exciting for budding bartenders to experiment with, flaunting Asian ingredients like angelica root, amchoor (mango powder), the dried stems of dendrobium orchids and vanilla pods.

When it comes to cocktails, I admire classic gin-based cocktails, believing strongly in the saying “keep it simple, make a mark”. A Negroni or a Dry Martini have always made their presence felt in the world of bartending, and at WOOBAR we always aim to execute these to perfection.

Having said that, I like to play with Tanglin. Not by complicating it, but by adding only two other ingredients and topping with a citrus garnish. With that, you still get a wide variety of flavours and sensations thanks to the assorted botanicals in the gin, and in some cases even the tonic.

NOSE: Highly herbaceous profile with a twist that comes from the Indian amchoor, a powdered form of unripe green mango. A good amount of alcohol burn, which is quite pleasing to the nostrils.

PALATE: Quite floral at first, particularly orchids, then quickly leaning towards the citrus end. All the citrus and herbaceous botanicals present in the gin are quite prominent.

FINISH: It’s intense towards the floral aspect. You’re left with juniper, the hero of the story, and citrus leads the charge; the warming burn of a slightly higher-alcohol gin is welcoming too. It’s quite a long finish as the ingredients are playful on your palate.

When you think about Singapore, the first thing that comes to mind probably isn’t gin. That’s something that Tim Whitefield, Andy Hodgson, Charlie van Eeden and Chris Box set out to change when they created Tanglin in 2018.

The Western expats were sat on a Singapore rooftop enjoying a selection of gins when they realised that the area didn’t have a gin to call its own. Considering Singapore’s recent surges in the hospitality and bar scene, they saw a perfect opportunity to change that.

After successfully pioneering the Singaporean spirits industry, Tanglin is now expanding and has chosen Australia as its first export market.

Tanglin is currently available in two unique flavours on our shores: Orchid, and Mandarin Chilli. Both expressions are a mix of Eastern and Western botanicals, combining traditional gin with the taste of Asia.

Meanwhile the Mandarin Chilli Gin, as the name suggests, combines citrus flavours with chilli and young ginger to give it “a little zing.”

Whitefield, who is also Head Distiller, said these flavours in a gin have rarely been experienced by Australian palates, and reflect his desire: “to capture in the spirit the five main cultural groups that have made Singapore what it is today – Chinese, Indonesian, Malay, Indian and European.”

The unique flavours, combined with Singapore’s distinctive climate of high humidity and consistent temperature have given Tanglin an edge on the world stage so far, already winning silver medals at the 2018 International Wine and Spirit Competition in Hong Kong and the 2019 San Francisco World Spirits Competition.

Like all good ideas, Tanglin Gin came to be over a round of drinks two years ago. Founded by Briton Andy Hodgson, the processes and organisation guy; Charlie Van Eeden from Holland, who handles branding and marketing; Aussie Chris Box, who deals with the finances and fellow Australian Tim Whitefield, the botanicals whisperer and chief distiller, Tanglin distils the first ever made-in-Singapore gin over at the industrial Mandai Foodlink. While he likes to joke that he learnt how to distil by watching YouTube videos, Tim has spent the past 10 years researching, talking to distillers and experimenting with gin. For Tanglin’s first expression, he’s created a gin using 11 botanicals, each selected because they represent Singapore.

There are the usual suspects like juniper, coriander seeds, angelica roots and orris root but what makes Tanglin Gin stand out is its use of orchids. Specifically, it utilises the dried stems of dendrobium orchids, which is also known as shi hu, the immortality herb used in traditional Chinese medicine that’s sweet and slightly salty. Other unique touches include the addition of vanilla pods and amchoor, a powder made from dried unripe green mangoes. The combination results in an audacious gin with a heady floral aroma that’s punchy when sipped neat. We recommend having it with a swig of tonic and a dash of orange juice to highlight its creamy sweetness. Here’s what Tim Whitefield has to say about his unprecedented creation. 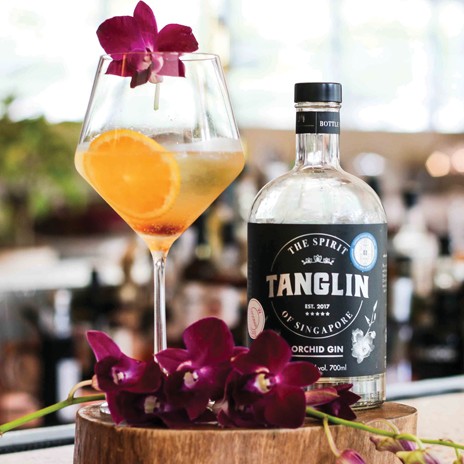 Check out the recipe for our The Locale, concocted by Rohit Suvarna for the Gin Society to suit the unique botanicals of Tanglin Orchid Gin. 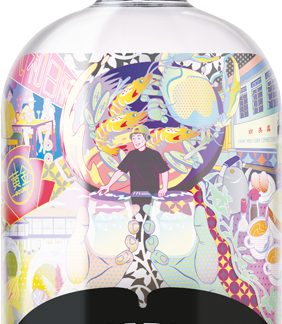