NO
To experience this site you must be of legal drinking age in your country of residence. By entering this site, you agree to our terms and conditions. We encourage you to enjoy the Gin Society responsibly. In accordance with the NSW Liquor Act 2007, it is against the law to sell or supply alcohol to, or to obtain alcohol on behalf of, a person under the ages of 18 years. Learn more at www.drinkwise.org.au.
Pink Pepper Gin – The Great Experiment 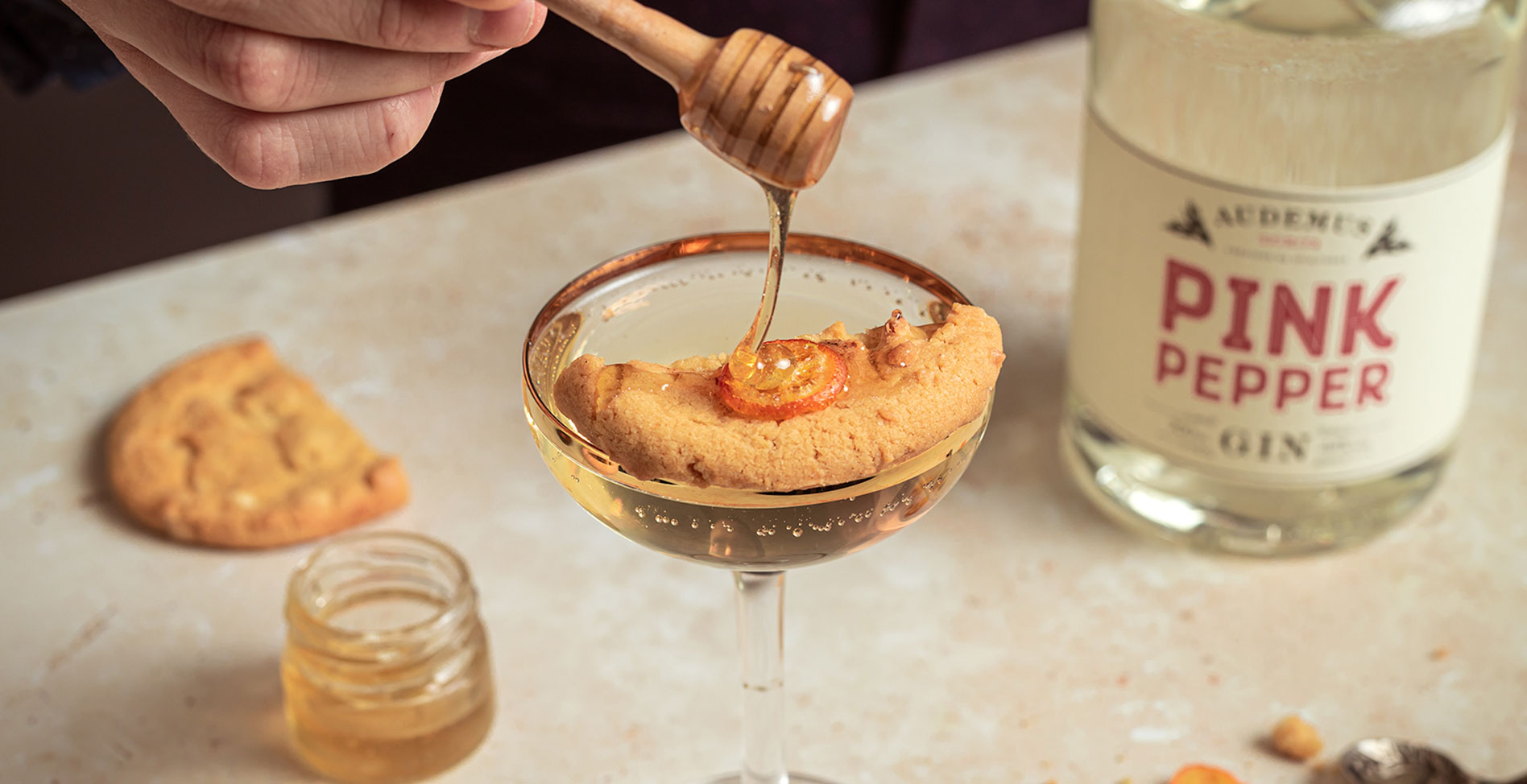 Turning away from traditional gin botanicals, distiller Miko Abouaf tells us about how his adventures with honey, vanilla and tonka led to the creation of Pink Pepper Gin.

From cognac to gin
After several years working as a cognac distiller, Miko decided to see if he could make a honey gin. He’d already explored various botanicals and production methods, taking inspiration from Ian Hart of Sacred Spirit’s scientific approach to vacuum distillation, and building his own library of distillates. “Of course, the core botanical has to be juniper, but once you have that you're free to do whatever you want, which is what makes gin so sensational,” Miko says. “Rather than creating a classic London Dry style or including the botanicals usually found in gin, I wanted to achieve a different expression. And so, when searching for ingredients, I embraced an empirical process of trial and error.” That might sound a bit too scientific for some but, sitting in his living room laboratory, next to a couple of 30-litre vacuum stills, it’s clear that Miko’s experimentation has paid off."...when I saw the flexibility offered by vacuum distillation, I thought it was fantastic. I had absolutely no idea about it to begin with. I went on eBay and bought myself a rotary evaporator and it was only when it arrived that I realised you needed a vacuum pump and a cooling system!” Having embarked on this learning process, he went on to co-found Audemus Spirits in 2013 with neighbour Ian Spink. “I was running a soup business at the time,” recalls Ian, “Miko came by with the first batch of Pink Pepper. I hadn’t had gin since I was young and got very drunk, but I was completely blown away.

The making of honey gin
Living in the heart of the Cognac-producing region in western France, Miko recalls how he’d come across a local spring honey that was “very floral, very creamy and just delicious”. At the time, he never imagined it would turn into a commercial product, and instead spent an exploratory six months working towards a recipe he was happy with. And yes, alongside honey, the spirit contains a fragrant punch of pink pepper. “I was testing out different botanicals and different recipes, but it was when I added pink pepper that there was a real eureka moment – that’s how the name came about.” The idea was to make something aromatic and intense, and in describing this botanically rich gin, Miko compares it to perfume. “In the top notes you’ve got the juniper, cardamom and pink peppercorn, which give it this real bright and heavy punch. In the core you've got cinnamon and two secret ingredients that I'm not allowed to disclose because we like to keep an air of mystery! Then, at the base, there’s distilled honey, which was the original aim, as well as tonka bean and vanilla infusions. Because these last two elements are not actually distilled, they give it a very rich fattiness and sweetness that lies at the bottom. This balance is really key to making it into something sippable.”

Winning hearts and minds
So how does a modern spirits brand fit in among centuries-old Cognac houses? Better than you might imagine, according to Miko. “The region is made up of people from all over the world. Cognac houses are traditionally from Scandinavia, the Netherlands and the UK, and so it’s actually quite an international and open mindset here. And while Maison Ferrand has been producing Citadelle Gin here for quite a while, we’ve built up a following. We’ve even had the maître de chai (master tasters) from Hennessy, Martell, Courvoisier and a lot of the other big Cognac houses come to visit us.” All of this goodwill comes with a lot of gratitude, and one way Miko and Ian have been saying thank you is through the names they give each batch of Pink Pepper Gin. There’s Brew de la Barde that’s dedicated to the family who put a roof over Miko’s head as he started out on his gin adventure and then there’s Vera’s Chocolate Cake in recognition of Ian’s grandmother’s formidable baking talents. “We felt it was a nice way to mark each batch,” says Ian.

The Negroni
50mL Pink Pepper Gin
20mL Campari
20mL Lillet Blanc
Stir it for a few seconds in a rocks glass with ice. Garnish with rosemary or orange.

København Klassisk: A love letter to the London Dry