NO
To experience this site you must be of legal drinking age in your country of residence. By entering this site, you agree to our terms and conditions. We encourage you to enjoy the Gin Society responsibly. In accordance with the NSW Liquor Act 2007, it is against the law to sell or supply alcohol to, or to obtain alcohol on behalf of, a person under the ages of 18 years. Learn more at www.drinkwise.org.au.
Negroni and gelato – a modern Italian love affair 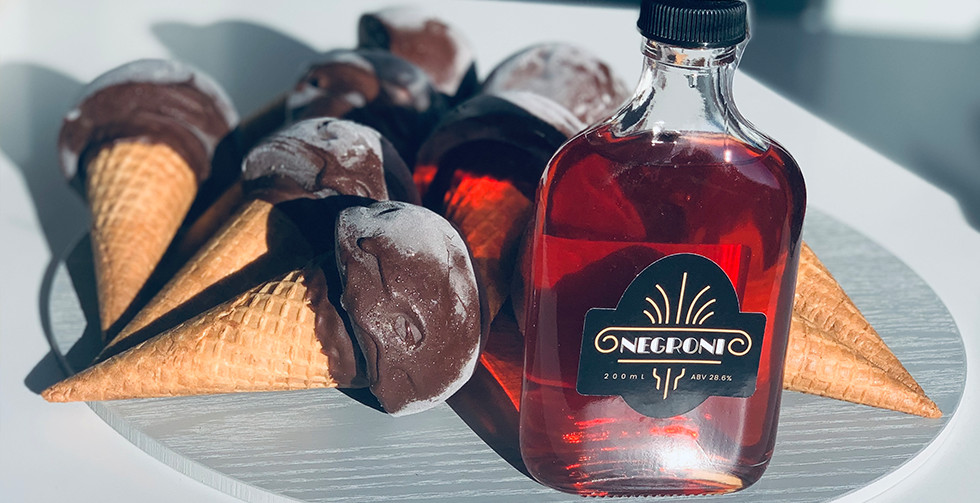 In celebration of Negroni Week Melbourne's Gelato Papa has created the ultimate boozy treat combining two Italian classics: The Negroni and gelato. The Negroni Choc top blends the magic of a hand-crafted gelato with the expertise of a perfectly-mixed cocktail.

Welcome to Negroni Week gin lovers! A celebration of one of the world’s greatest cocktails - the Negroni - created to raise money for charities around the world. Established since 2013, Negroni Week has grown from about 120 participating venues to over 12,000 venues around the world and, to date, they have collectively raised over $3 million for charitable causes.

So if you've ever desired a little shot to liven up your gelato, Gelato Papa has created a dessert to make your edible cocktail dreams come true.

Gelato Papa is a traditional Italian gelateria in Preston and Fairfield, Victoria. Focused on flavoursome and authentic Italian home-made gelato, Lilly, the head of Papa Gelato, has been making gelato since a trip to Sicily in 1996. She studied under one of Italy’s great gelato masters at the International Culinary Institute for Foreigners in Piedmont, Italy. Having learnt the art of balancing gelato from scratch, which is the secret to all the finest gelatos, Gelato Papa serves the best gelato with a modern twist.

“Making gelato from scratch means there are no limits to the gelato flavours that can be created. I love collaborating with quality food and beverage purveyors such as Gin Society. It's been exciting to turn their Negroni cocktail into a gelato flavour, if you love gin and dessert this is the ultimate combination” says Lilly.

You can visit Gelato Papa in Preston and Fairfield in Victoria. Pop in-store and grab a take-away tub anytime. They’ve got 500ml - 1500ml tubs available starting from $15.00. Alternatively, order through Uber Eats if you’re in the area and not up for leaving the house! Check out their website Gelato Papa for more details.

History of Negroni and Gelato
The Negroni is perhaps the quintessential aperitivo - one part gin, one part sweet vermouth, one part Campari. A traditionally-made Negroni is stirred, not shaken, and built over ice in an old-fashioned or rocks glass and garnished with a slice of orange. Legend has it that Count Camillo Negroni invented the Negroni in 1919. A frequent traveller to London, the nobleman developed a taste for gin. Upon his return to Italy, he asked his local bartender to swap soda in his Americano for gin. Other patrons then began to ask for the drink and, soon after, it became known as the Negroni in honour of the count.
The 'modern' history of gelato began during the Italian Renaissance era in the 14th century when the egg cream gelato was officially developed by famous artist and architect Bernardo Buontalenti, a native of Florence. Gelato is the Italian word for ice cream derived from the Latin word 'gelātus' (frozen). Italians consume over 4 kilograms of gelato every year and who can blame them? Lower in fat and calories compared to traditional ice cream, gelato is made with a greater proportion of whole milk to cream. Less fat does mean that gelato doesn't freeze as hard as ice cream. It’s usually served 10-15 degrees warmer than ice cream which means it melts in your mouth more quickly letting you experience stronger flavours.