NO
To experience this site you must be of legal drinking age in your country of residence. By entering this site, you agree to our terms and conditions. We encourage you to enjoy the Gin Society responsibly. In accordance with the NSW Liquor Act 2007, it is against the law to sell or supply alcohol to, or to obtain alcohol on behalf of, a person under the ages of 18 years. Learn more at www.drinkwise.org.au.
How a father-daughter duo mastered the art of gin 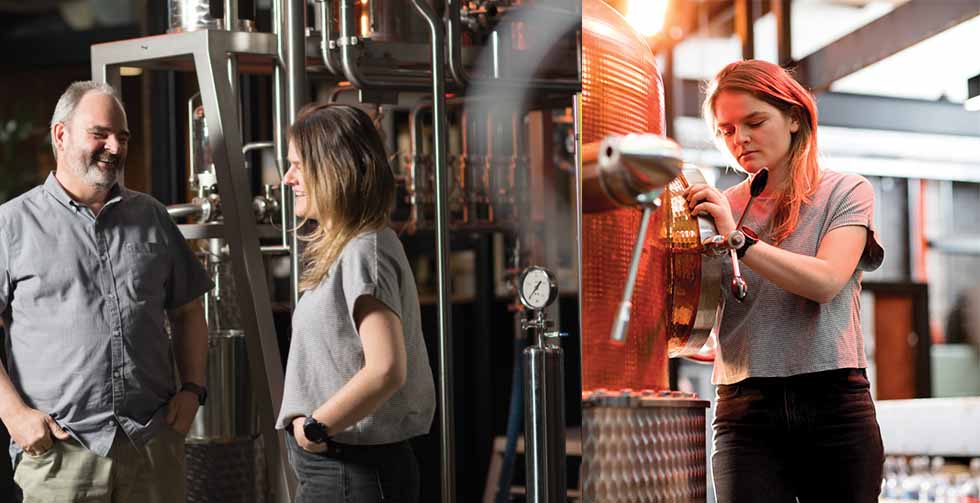 Combining Brogan’s flair for chemistry with Simon’s business nous, it’s no wonder this powerful father-daughter team behind Hearts Afire gin have made such great strides in just a few short years.

Simon Carr didn’t always dream of crafting gin. In another life – one that spanned almost three decades – he had a successful corporate career. His job took him all over the world, connecting him with interesting and high-profile individuals. But there was something missing. A void that the fast-paced corporate lifestyle simply couldn’t fill.

“As I progressed further and further in corporate life, I was feeling less and less fulfilled,” says Simon. “It became more about the process of the big machine rather than the fulfilment I was searching for in life.”

The first to admit he enjoys a tipple or two, Simon figured he could try his hand at making drinks. Wine was his first thought, but as the pieces fell into place it became clear that gin was the right passion project.

“Growing up in Africa, that was an environment where quite a lot of gin was drunk in the communities,” says Simon. “It was the go-to other than wine. So it was a big focus for me.”

Around the same time Simon was learning about distilling and manufacturing in the drinks segment, Brogan was also deciding what to do with her life.
“I was finishing up my medical laboratory science degree in my last year and I wasn't loving it,” Brogan admits. “It was interesting, but I didn't know if that was what I wanted to do at that point. Dad suggested I look into a Masters of Brewing and Distilling, so I decided to apply and see what happened.”
Brogan’s new studies were all about the science and flavour chemistry of crafting spirits, and so it was obvious the father and daughter duo were finally on the right path.

Realising it would always be ‘Brogan’s way’

Becoming award-winning gin-makers with an exceptionally popular distillery might have been the dream for Simon and Brogan, but it was certainly not the original plan. Instead, says Simon, it was the challenges of them both studying while trying to set up their business – with all the associated highs and lows – that they forged an even more powerful bond than they already had.

“That’s how the name Brogan’s Way came about,” jokes Simon. “It became pretty clear early on that one of us had the touch. Brogan’s got this real gift for balancing science and flavour, and so it became ‘her way’. Trust me – if it was called Simon’s Way, I don’t think we’d be anywhere near as successful as we are now, because people wouldn’t be drinking the gin!”

After wrapping up their studies, Simon and Brogan set forth on a personal ‘world tour’ to help inform the how, what, where and why of crafting their own gin. They spent two months touring distilleries, meeting spirts makers, seeing their handcrafted still in its birthplace of Germany, and mastering the fine art of distilling.

Eight weeks. 30 distilleries. And a whole lot of knowledge to parse before they unveiled Brogan’s Way in September 2018.

Despite being an unknown 24-year-old distiller at the time, Brogan and her impeccably crafted gins saw immediate success. This youthful distillery with a hub in the beating heart of Richmond, Melbourne was making a name for itself – and fast. Within a year, their first three gins – Royal Blood, Everyday Salvation and Evening Light – all picked up major gongs at the Australian Distilled Spirits Awards and the renowned San Francisco World Sprits Competition.

Things were looking up. Until the world stopped.

“My most hated word in the vernacular now is ‘pivot’. I think I've pivoted so many times my neck is on a swivel. We did everything – we made hand sanitiser, we moved online, we upgraded our website, we introduced a takeaway service, we focused heavily on virtual tastings. Then it was a case of trying to deal with multiple reopenings and density rules. One of the key learnings for us was that consumer behaviour can turn on a dime. 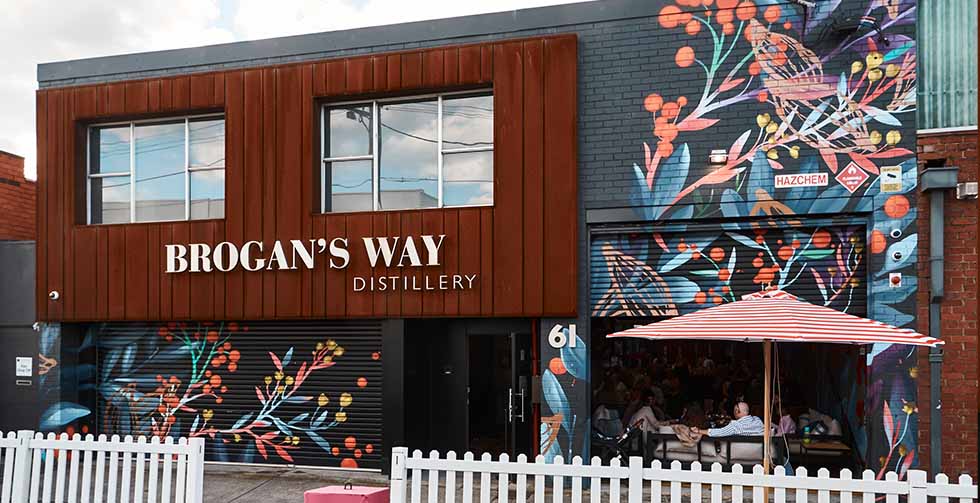 “Every time we come out of a lockdown or there was another announcement, behaviours changed dramatically. And you have to move fast.”

Despite being such a young distillery, Simon says the local community provided a groundswell of support during Melbourne’s strict lockdowns.

“The people of Richmond really got behind us during that first lockdown,” he says. “They were ordering online and trying to find ways to connect with us, so there was most definitely a level of support there. When we reopened in June 2020, there were quite severe restrictions where you couldn't be in a space for more than two hours and the density limits were quite onerous. We found that lots of people were very eager to get out and meet their friends in places that were different, like our distillery. So we got a lot of support through that period.”

But beyond the community element, Simon and Brogan spotted a business opportunity in the lockdowns – an opportunity to bring their niche gin label to a wider market.

“One of the good outcomes was that many of the retail groups started to focus on locally made products, as they were trying to connect with communities. That allowed us to get in front of many of the big retail groups and it's expanded our footprint. Our sales footprint was nearly 200 retail outlets as we came out of COVID, compared to just the 50 that we had going into it. That's been a big upside for us; it really gives us something to work with.”

While the effects of COVID-19 will be felt for some time to come, Simon is focused on how to leverage opportunities in this ‘new norm’.

“In the old world, you could plan for a number of business scenarios. Things like the virus still impact businesses but they're not driven by markets. We're going to need a lot more strings to our bow, and we’ll need to keep this idea of being nimble and moving on our ideas. The ones that work, keep adding fuel to them. The ones that don't work, put out those fires quickly.

“Fail fast, I suppose, is the business term. We now have to make decisions really quickly. That's our philosophy.”

It’s because of Simon’s ambitious business mind that you’ll be able to find Brogan’s Way spirits on more shelves in the very near future.

One of Brogan’s latest concoctions, Hearts Afire, is our member gin. The perfect winter gin – although just as quaffable all year round – it works beautifully in a Negroni or a Sweet Martini. Simon also loves it as a base for Sangria. And on those freezing winter nights, it’s the ideal addition to a hot chocolate. “It does exactly what we were hoping the gin would do,” he says. “It's a warming, comforting-style drink.”

Here’s what the gin-maker herself, Brogan Carr, has to say about Hearts Afire Gin:

“We designed Hearts Afire based on the flavour profile of mulled wine, so it’s a gin that has all the sorts of flavours you've come to expect from mulled wine. There's the orange peel, cassia, cloves, nutmeg, aniseed myrtle, cinnamon myrtle and lots of lilly pilly, strawberry gum and roasted wattleseed. Everything emphasises the spice flavours without it being a hot, spicy gin. Instead, it’s a really warming gin – quite mature but still balanced.” 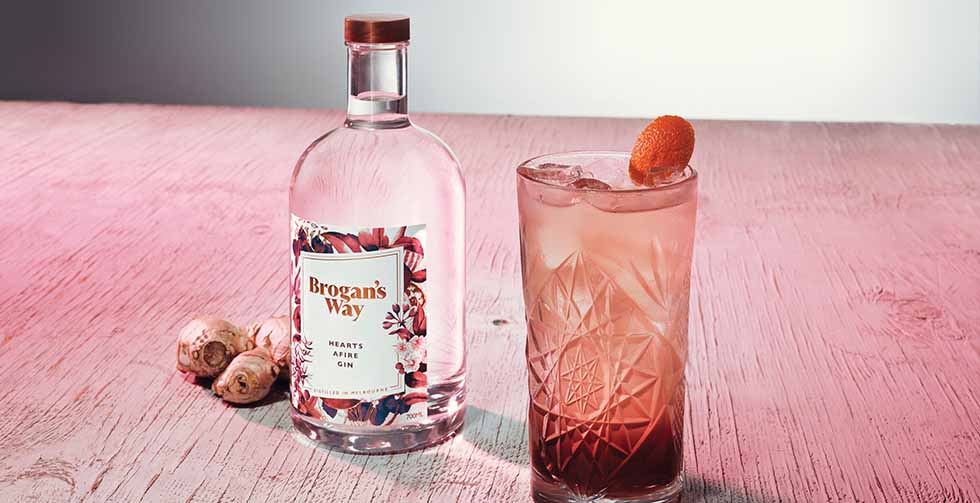