Phillip A Jones – aka the Martini Whisperer – is a Canberra-based craft spirits educator and advocate spoke to us about all things martinis, including which tipples he’s currently enjoying in his personal collection of 230 gins.

How did you come to be called the Martini Whisperer?

A friend and I went to Eau De Vie, a bar in Melbourne. It’s superb for martinis. We had a very nice time and because it was a school night we were leaving nice and early. Just as we were exiting, an entourage of actresses turned up. They had booked a private room and were celebrating something. They grabbed me and said, “You can’t leave!” And I said, “Why?” They said, “It’s bad luck for just women to drink. We need a guy in the room.” So my friend and I stayed. The actresses then said, “We don’t know what to drink.” So I l created a bespoke martini for each of them. The actresses loved them and said, “You’re the Martini Whisperer!” It kind of stuck.

What do you love most about martinis?

Every single martini is unique in and of itself. We have thousands of gins now and so many different styles of vermouth and garnishes – the permutations are really quite infinite. When it all comes together, there’s nothing more sublime. It’s the simplest cocktail. But it’s the only cocktail you make in collaboration with the maker.

Can you tell us about your first martini experience?

It wasn’t a good one! Like most people, you like the idea of a martini more than the martini itself. Many, many moons ago, a colleague of mine had graduated from military college. So we all went out and I was in black tie and we decided vodka martinis were the thing to do because, well, Mr Bond. It got better from there, thankfully. Quite a few years later, I started having a martini or two on a Friday evening to start my weekend on the right note. That has since become a bit of a ritual.

What does being a professional Martini Whisperer entail?

Back in 2012, Canberra was having its 100th birthday. The official organising body and its creative director put a call out for people to contribute ideas for what should be part of the program. So I tweeted to my 50 or so followers: “I’ll make a martini for Canberra.” The ACT government team then re-tweeted it to their 50,000 or so followers. So I had to do it then. I created two versions of what became known as the Centenary Martini. The next thing you know, we had a media event with the ACT Minister for the Arts, newspapers were covering it, and there was a black-tie ball at the National Press Club. It just got bigger and bigger. From that brilliant beginning, I now have a very popular and wholly independent website, the Martini Whisperer, and I am an advocate and educator of craft spirits. I regularly host masterclasses and public, educational and corporate events, and work with distillers to help develop their spirits, especially gins. I am also a regular judge at tourism and spirits industry awards. Most recently, I was a guest judge at the New Zealand Spirits Awards. I am also working on a TV series around craft distilling in Australia.

What are some of your current favourite gins?

Lately, inspired by your ‘Juno Gin’ issue, I’ve been enjoying some New Zealand gins. Scapegrace Gin is a lovely gin that makes a killer martini. There’s one out of England called Ableforth’s Bathtub Gin. It’s just one you sip on ice. It’s very herbaceous and gorgeous stuff. French gin Citadelle is quite subtle and beautifully dry. The other one I’m enjoying right now is one that my contributor sent me from Stockholm – Bränneri Gin. It’s a small-batch gin. Their whole premise of gin-making is so different from what we do in Australia. The viscosity is interesting and the botanicals are so unique. Old Young’s out of the Swan Valley is terrific and Big River out of Canberra is also really gentle and well rounded.

There’s always Plymouth Gin and Tanqueray in my freezer – they are my house pours. I also love Jensen’s Gin.

What’s the secret to a first-class martini?

If you do nothing else, make it as chilled as possible. Martinis have a life expectancy of about 15 to 20 minutes, as a rule. After that, they are just a glass of warm booze. You want everything as chilled as possible – your glasses, your mixer, your gin. I always keep my favourite gins in the freezer.
Use the best ingredients available to you. For me, it has to be gin and it has to be dry vermouth. Then you want the conditions to be right: the music, the ambience, the company you’re in. You’re making an occasion for yourself.

Finesse. I appreciate gins where there is a lot of subtlety and where the botanicals balance each other out. I’m not a huge fan of big flavour profiles, which why I lean towards European or the classic London dry styles because they tend to have balance.

It is embarrassing. I have about 230 bottles! I have a great little neon sign with ‘Martini Whisperer’ above it that my wife gave me. The thing is I share them. I bring my own stock for clients to try when I do masterclasses.

Can you share your perfect martini recipe with us?

The alchemy between the dry vermouth and gin is key. You want them to complement each other and not compete. So my rule of thumb is if you’ve got a gin, for example, with a strong flavour profile, then I’ll dial back the vermouth.
If we are talking a 60–70mL martini, I might do 5mL or 10mL of vermouth to balance the gin, depending on how intense the flavour of the gin is.
Certain gins will work best with certain garnishes. For example, a No. 3 London Dry Gin or a Plymouth Gin – those are my favourites – work for me with a nice lemon twist as opposed to an olive.

Are there any other cocktails you enjoy beyond a martini?

An Old Fashioned can be pretty hard to beat, or a Manhattan. You also can’t go wrong with a Negroni come summer.

What’s the best martini experience you’ve ever had?

I was in Palm Springs early this year for a festival called Modernism Week. It’s the natural habitat of the martini there. The great thing about it is that no matter the time of day, wherever you are, you can get a martini.
There’s a place called Melvyn’s. It’s old Hollywood glamour and so anybody back in the day – like Bob Hope and Sinatra – would go drink there. It was like something out of Mad Men. Every single person in the restaurant was drinking martinis. That was just my happy place.
Visit the Martini Whisperer for independent insights into martinis, craft spirits and cocktail culture with an Australian slant at https://martiniwhisperer.com 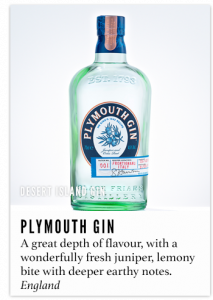 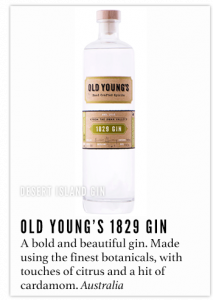 What 3 gins would you take to a desert island?

Plymouth Gin – “It’s my comfort zone. It’s a classy, versatile gin and it’s a classic for a reason. I can adapt it to different styles of cocktails and it never lets me down.“ KI NO BI Kyoto Dry Gin – “The Japanese are making exceptional gin. Ki No Bi is just gorgeous and uber-refined. It’s pretty special.” Old Young’s 1829 Gin – “It’s an Aussie gin. Old Young’s has a fantastic use of juniper. It’s got a finesse to it and it’s still really versatile.”