What do you love about gin as a spirit?

Its versatility – it’s so mixable. You can pop it in with soda or tonic and sip it on a warm day, or you can go to great lengths to make intricate cocktails with it. It’s definitely a malleable spirit.

Do you have a preferred way to drink gin?

Depends. I’m old school. I like tonic. I know there’s a big move towards soda but if I’m sipping, I do like a gin and tonic. If I want to taste the gin, I’ll drink a martini.

A lot of things. I look at the base spirit that’s been used, which will give it mouthfeel and the underlying character. I look at the style – whether it’s savoury, citrusy or whatever it is – but it has to be balanced.

There’s some East London Liquor Company Gin in there. I’ve got a bottle of Ransom Old Tom, Animus, a bottle of Melbourne Gin Company Single Shot, and a bunch of genevers [Dutch for ‘juniper’, a popular spirit from the Netherlands often considered the ancestor of gin].

What’s something about gin that most people may not know?

Gin has historic ties to Holland. After the English Catholic monarchy was kicked out of England, [in 1689] William of Orange, a Protestant Dutchman, became king. King William III came over to England and banned all the wine and brandy – all the French stuff – and brought with him genever, a spirit from Holland. Genever has essentially evolved into what we know as gin today.

What’s the most interesting gin experience you’ve ever had?

I drank six martinis once and ended up in hospital – but not for me. I had to look after someone who had accidentally slipped and cut their wrist quite badly. But, otherwise, any martini experience I’ve ever had has been a good one.

If you were stuck on a desert island, what three gins would you bring with you and why?

I’d bring East London Liquor Company because it is one of my favourites and it’s got lots of cardamom, which I love. NOLET’S Gin, because it’s a little different and it’s got raspberry and peach in it, so it’s kind of like a dessert – so after my coconut dinner, I could drink peaches and raspberries. My third would be a barrel-aged genever, because if I can’t take whisky, I’ll take the next best thing. 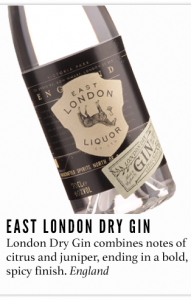 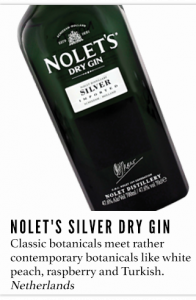 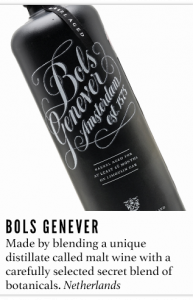 Yes, making an Old Fashioned with an Old Tom or a genever works really well, instead of a whisky. Or, instead of having a gin and tonic, try using a charred grapefruit tonic syrup and adding soda.

How would you describe the Gin Palace to anyone who hasn’t visited before?

An ode to the 19-century gin palaces of Melbourne when it was the richest city in the world. There are lots of nice big comfy couches – it’s like the lounge room you wish you could have at home. It’s super comfortable, very relaxed, and you have someone looking after your every need. And it’s open late, so you can sit there till the wee hours.

What’s the in-house range of gins like at Gin Palace?

Always evolving. We try to keep it at 200-plus gins. There’s been a lot more that have come and gone. There are definitely favourites that stay but there are so many gins out there, so it tends to be that the weak are culled and the strong survive. There are a lot of Australian gins on the market at the moment, so our back bar does represent a lot of those. I’d say the gins are predominantly Australian, but there’s also a selection from almost every country.

What are some of the more popular gins at the Gin Palace? What are people drinking at the moment?

Australia is a big focus. A lot of customers want Australian gin. Four Pillars have done really well. Their Bloody Shiraz Gin is one of those gins that lots of people ask for. Gin Palace is the only bar to house-pour Sipsmith, so we do go through quite a bit of that as well.
It’s great that we are going through the latest instalment of the gin craze, the likes of which really hasn’t been since the early days in London. It’s a global phenomenon and there are thousands and thousands of gins out there. It’s not a bad thing because it means that everyone has to up their game and make better and better spirits. It’s good for everybody. We are also very lucky to have opened up a gin bar 22 years ago and now we’re riding through the biggest gin craze in Australia ever.
Visit the Gin Palace at 10 Russell Place, Melbourne. They’re open from 4pm to 3am. ginpalace.com.au