NO
To experience this site you must be of legal drinking age in your country of residence. By entering this site, you agree to our terms and conditions. We encourage you to enjoy the Gin Society responsibly. In accordance with the NSW Liquor Act 2007, it is against the law to sell or supply alcohol to, or to obtain alcohol on behalf of, a person under the ages of 18 years. Learn more at www.drinkwise.org.au.
Expanding the brand with Hickson House 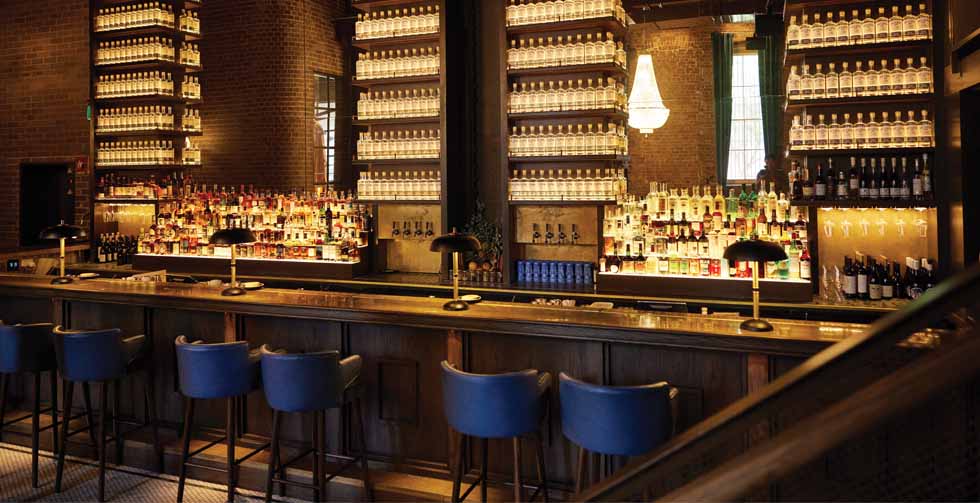 At their brand-new digs in The Rocks, legendary entrepreneur Mikey Enright and his Barrelhouse Group partner Julian Train are putting Sydney gin on the map once again at Hickson House Distilling Co.

Staunch in the face of adversity

To say Hickson House’s journey to opening was mired in challenges would be a severe understatement. What was supposed to be the beginning of a grand new adventure in January 2020 quickly became derailed as a stealthy virus spread around the world. While it took almost two years for Mikey and Julian to unveil their crowning glory in the historic laneways of The Rocks, Hickson House Distilling Co. is perfectly placed to meet the demands of thirsty spirits lovers, fine-diners and those who simply want to share a meal with friends.

“We really focused on the distillery not just being a storage facility for the spirits,” Mikey explains. “It’s an experience in itself. Our talented head chef has worked closely with our distiller Tim to incorporate some of the botanicals we use in the gin with the flavours of the food we're producing.”

While the distillery officially opened at the end of 2021, a new COVID strain put something of a dampener on the achievement.

“As soon as we launched, Omicron kind of closed it all down again,” Mikey says. “People were nervous, they stopped going out and started leaving the city earlier. We were only open for a few days over Christmas and we even had to cancel our New Year’s Eve event. It was a tricky time to be selling gin.”

Tricky? Yes. Impossible? Never. Thanks to a groundswell of local support as well as a top-notch product – the trio of Hickson Rd gins – Mikey and Julian hosted a “banging launch party”, are sponsoring several events in the coming months and are welcoming droves of excited visitors into their distillery every week.

In fact, Mikey sees the pandemic-induced downtime as something of a boon for Hickson House. “It allowed us time to do more planning, to get ourselves organised and to ensure all our equipment was working in harmony. We even made our first batch of whisky, which is pretty amazing.”

No strangers to success

If you’ve been around the drinks scene in Sydney, you already know the name Mikey Enright. He’s a genius mixologist, a savvy entrepreneur and has a flair for spotting gaps in the market. It’s why arguably his most famous accomplishment, The Barber Shop in Barangaroo, which doubles as a cocktail bar and a classic barbershop, is so well-regarded.

After the success of The Barber Shop, Mikey and Julian struck gold again with their classy inner-city venue The Duke of Clarence. Bringing their vision of a mid-1800s tavern to life, it’s like stepping into a time machine where guests can enjoy fine cocktails, cask ale and unmistakeably British eats. With their latest venture, the pair will undoubtedly find success a third time if the quality of their gin is anything to go by.

And for Julian, leaning into the idea of a ‘classic’ gin is what Hickson House is all about.

“We're at a bit of a crossroads,” he says. “I feel like the industry is at a point where all these places have opened up and everyone is trying to be different. A big question that we've been trying to answer is: how do we stick to the roots of what gin quintessentially is while still injecting the flavours of Australia in a balanced way?

“I believe that if you're going to call something gin, you have a responsibility to give it a gin profile. The big challenge for everyone is to create a point of difference, but also to not cross the line where it becomes a flavoured vodka. That's why we spent over a year working on our product, and that really became the cornerstone of everything we do. We built everything from a base of classic gin flavours, and then brought things in only when they made sense to the nose, the balance and the palate – as opposed to just trying to be ‘out there’ for the sake of it.”

Finding a home for the spirit

Mikey has spent years helping other distillers make their own gins, so when the kernel of Hickson House started to develop into a fully formed plan, he wanted to do things right.

In an ideal world, Mikey and Julian’s combined experience and industry clout would have made the emergence of Hickson House Distilling Co. a smooth journey, at least compared to their less-seasoned compatriots. But it took them almost two years to find their ‘unicorn’ space.

“It’s been a journey just trying to find the space,” Julian says. “We were looking around the city trying to find this unicorn where we could be close enough to the city to welcome people into the home of spirits. We looked all over within a five-kilometre radius of Sydney’s CBD.”

Fortuitously, the disruption that COVID caused to other businesses created an opportunity for the Hickson House team.
“It sounds terrible, but prior to COVID we would have had zero chance of even being presented a space in The Rocks like the one we are in. We've also been lucky that the state government and The Rocks’ strategy team have been incredibly supportive of what we're doing, which is essentially putting a highly flammable factory into a significant heritage building.

“We're a ferry ride away from lots of parts of Sydney. There's loads of public transport. It's an easy walk down the hill from the CBD. We're really, really blessed with a location that's super-easy to come and visit.”

Making the trip worth it

Of course with an abundance of choice available to the average punter, Mikey and Julian understand that they need to deliver a product worthy of patronage. It’s why they’ve taken the time to ensure every ‘t’ is crossed and every ‘i’ is dotted, especially when it comes to the nuances of their gins.“Mikey and Tim are both incredibly qualified in the world of gin,” Julian says. “Tim with his experience at Beefeater and also being trained by Desmond Payne. Both of them being judges at various gin shows. Our ownership of The Barber Shop. We've lived and breathed this spirit for many, many years. We've tasted a ton of gins, we've been to a lot of distilleries, and I suppose what has come out of that is we’ve managed to get that beautiful balance of showing off Australia – in the aroma, in the flavour and in the mouthfeel – while not stepping too far away from that ‘classic’ gin element.” Mikey says that this distinction to be ‘classic’ while still innovative is what sets Hickson Rd gins apart.
“Is an Australian Dry gin the same as a London Dry gin? No. They are remarkably different,” Mikey says. “Australian Dry is almost like its own category these days. So that’s how we approached our Australian Dry. It has citrus on the nose, it’s a little bit more sherbet-y, and it is flavour-forward but with the dryness of juniper. We also have our London Dry and our Harbour Strength, which are both clearly defined gins in their own right.”

It's been an uphill battle to get Hickson House Distilling Co. off the ground, but now that it’s here we foresee it will become a stalwart of The Rocks and a must-visit destination for any discerning gin lover.

Meet the magician behind Island Gin